When you are given a job, do you save the tools you use for it? Likely you would only for a significant event–like sealing the coffin of a president.

S.S. Elder, a welder in Springfield, Illinois, was given the duty of sealing President Abraham Lincoln’s coffin before his burial on May 4, 1865.

Elder saved each tool he used to perform the task, eventually preserving them permanently in a shadow box. His carefully handwritten labels describe each tool and document his role in Lincoln’s funeral.

Elder was one of the millions of Americans who realized they were witnessing a unique moment in history. Thousands of people who paid their respects to Lincoln as his funeral train wound its way from Washington, D.C., to Springfield, Illinois, saved the ribbons, pins or other mementos from their brush with history. Explore the path of Lincoln’s Funeral Train. 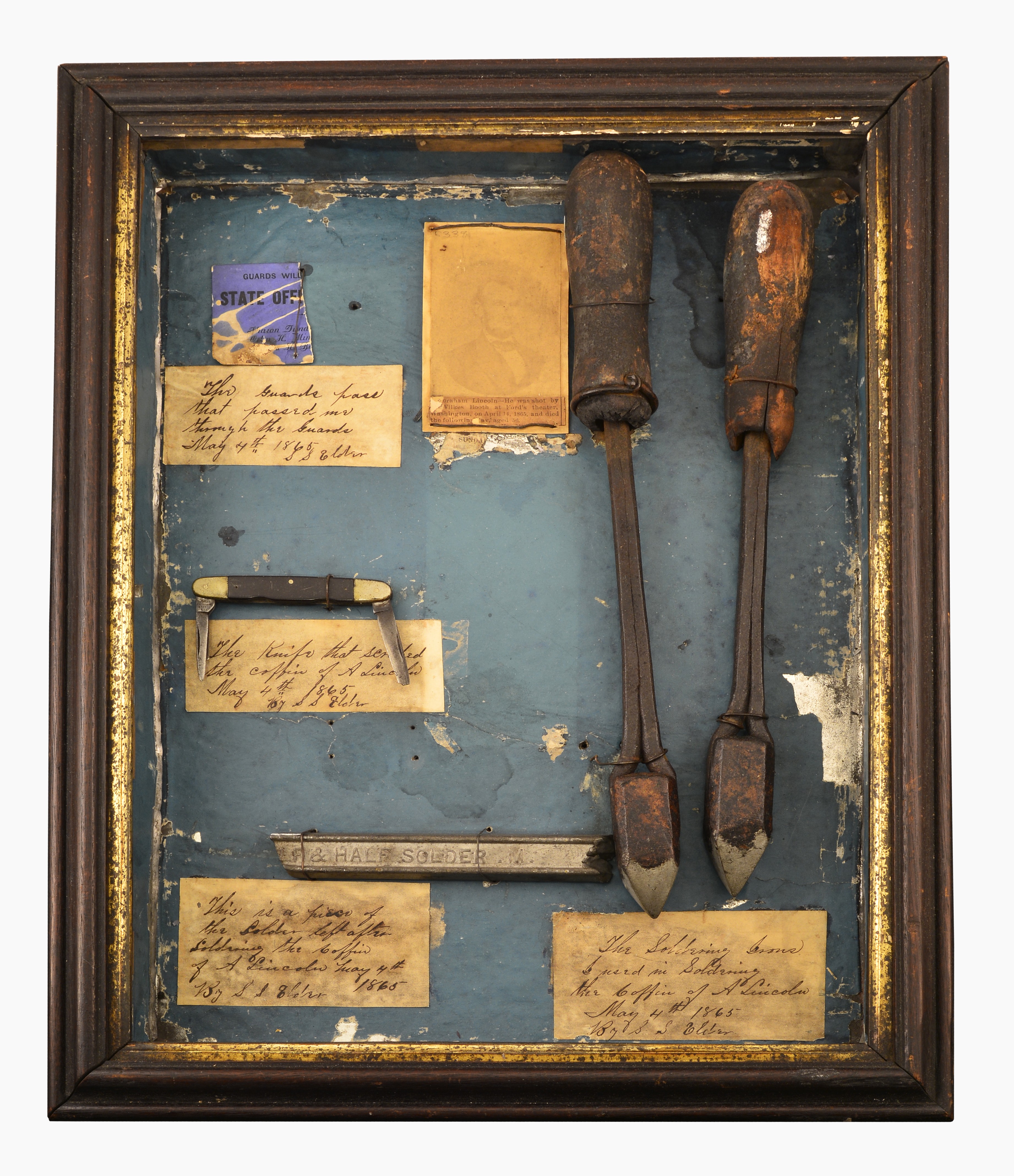 “The Soldering Irons I used in Soldering the Coffin of A Lincoln, May 4th 1865 By S S Elder.” Elder heated the soldering irons to melt the small pieces of solder. He then applied the melted solder to the casket to be sealed.

“This is a piece of the Solder left after Soldering the coffin of A Lincoln May 4th 1865 By S S Elder”   Solder is a soft metal that welders use to fuse together materials. Elder melted part of this bar of solder and applied a small amount to the casket lid, forever sealing Lincoln’s casket.

“The knife that scraped the coffin of A Lincoln. May 4th 1865. By S S Elder”   As part of the casket sealing process, S.S. Elder used this knife to scrape away the extra melted metal, known as solder, before it cools to smooth the surface.

S. S. Elder may have gotten this card, which bears a faded image of Lincoln, as a souvenir at the funeral procession.

Elder's ticket probably allowed him to bypass the thousands of people who came to see Lincoln’s body. Later, Elder wrote that, “the crowd surged against me so that acid from the bottle [sic] splashed on the blue cardboard pass nearly obliterating the words printed on it.”

What did Lincoln wear to Ford’s Theatre the night John Wilkes Booth murdered him? See his clothes, including the special message sewn inside his overcoat.

The presidency is known to age a person quickly. How did the stresses of the presidency and Civil War change Lincoln’s appearance?

For seven weeks in summer 1865, the country’s attention was fixed on a small courtroom in Washington, where eight of John Wilkes Booth’s accused co-conspirators were on trial for their lives. See memorabilia from that trial, including fragments of rope believed to be from four conspirators’ nooses.

The U.S. Sanitary Commission auctioned this autographed quilt to raise funds for the care of Civil War soldiers in 1864. How many of the then-famous names on it do you recognize?

The night of April 14, 1865, attendees of Ford’s Theatre expected to see a regular performance of “Our American Cousin.” Little did they know that what they would see that night would change the course of American history.