After John Wilkes Booth shot President Abraham Lincoln on April 14, 1865, he dropped his deringer pistol. What should happen to the weapon has been a question ever since.

The gun John Wilkes Booth used to change American history was a .44-caliber pistol made by Henry Deringer of Philadelphia. Booth could easily hide the weapon in his pocket.

After the assassination, theatre patron William T. Kent found the pistol on the floor of the Presidential Box and turned it over to investigators. The U.S. Army Judge Advocate General’s Office used it as evidence in the conspirators’ trial in May and June of 1865. Eventually the War Department, today’s Department of Defense, displayed the deringer at its headquarters.

In 1931, General Ulysses S. Grant III, in charge of planning the new Lincoln Museum at Ford’s Theatre, asked to display the weapon and other Lincoln assassination artifacts. The Adjutant General of the U.S. Army denied the request, saying:

“The relics should not be displayed to the public under any circumstances, on the theory that they would create interest in the criminal aspects of the great tragedy, rather than the historical features thereof, and would have more of an appeal for the morbid or weak-minded than for students of history. […] the Lincoln relics should not be placed upon exhibition anywhere”.

After further questions about propriety, they first went on display in 1942, when a military tribunal for German saboteurs was taking place nearby.

Ford’s Theatre has displayed the deringer since.

What do you think about displaying a murder weapon at a historic site? Take our poll below. 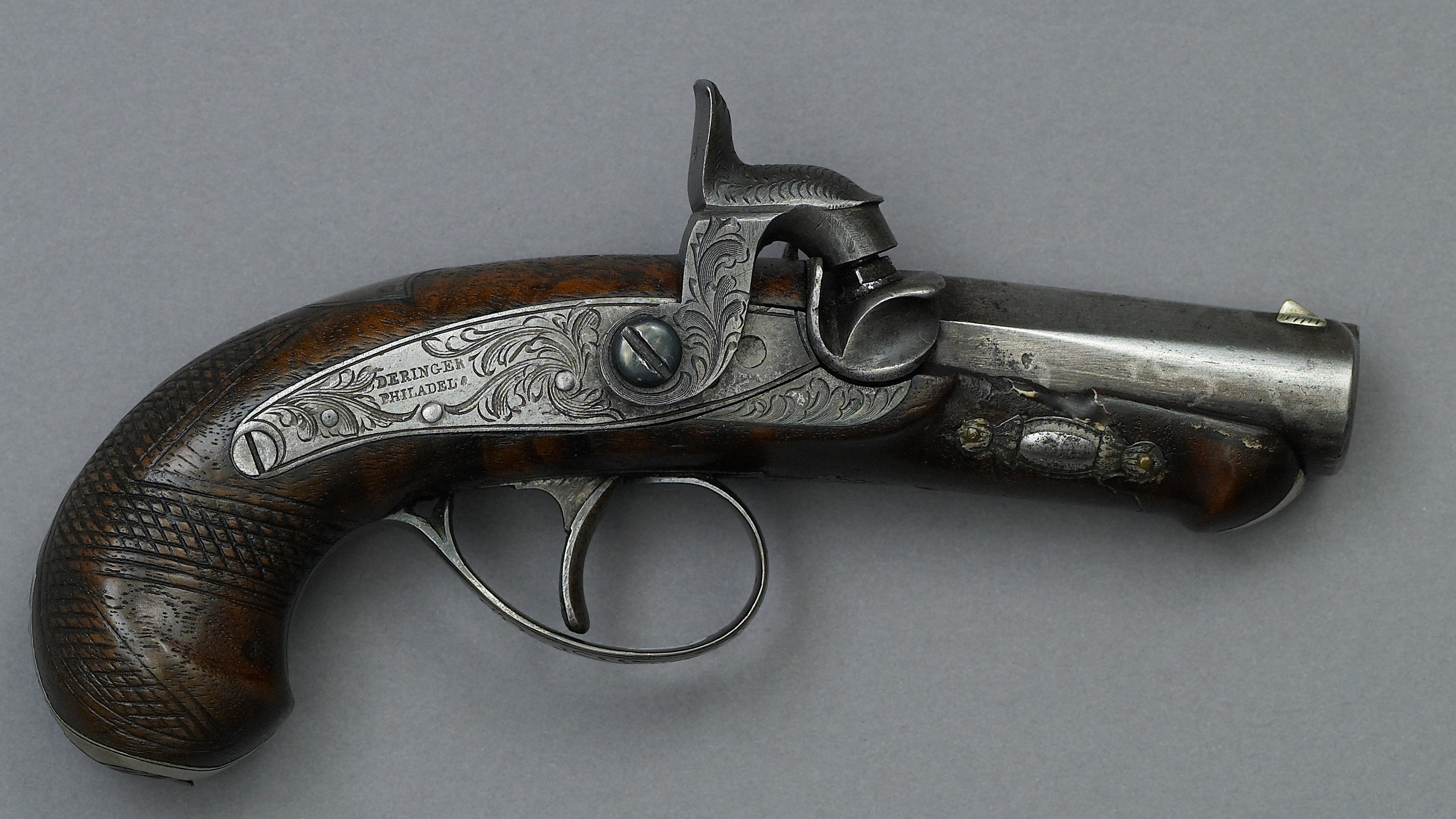 The deringer pistol was favored for its small size. Booth was able to conceal it inside his pocket when he entered the Presidential Box at Ford's Theatre.

The engraving names the creator of the pistol: Henry Deringer of Philadelphia.

It was this tiny bullet that would impact American history. Booth fired a single, round lead ball right behind Lincoln’s head to kill him.

I don't believe the murder weapons should be displayed in public. Though it's a great piece of visual evidence of what happened during the event, it can be a traumatic one.

Tastefully, reverently and with respect to the victim(s). But, in a historical context like the Lincoln assassination, they most certainly tell part of the story and cannot be left out. So much "cancel culture" today; one can't tell a story without being able to present all sides of the issue, all historical artifacts and the many angles and perspectives of history.

I don't agree with the wording, but to put it simply, it's a part of history. We learn and study the Indian Removal Act and WW2, both are horrific and terrible things that could interest a "weak minded person." I don't always want to learn of the macabre in history, but it is still important to learn it, to make sure it doesn't happen again.

The most important thing is to not glorify the violence or the criminal - however, I feel that it’s definitely still possible to display weapons without doing this. If the emphasis is on telling the full story of the historical event and not on glamorizing the perpetrator, then displaying the weapon used only serves to more fully recount the narrative.

To the public In a case with historical information and explanation. History should not be hidden.

To hide violence and it's instruments is to ignore entire sectors of history. Just like books and desks, weapons are critical to understanding the full historical context of the event in question. Weapons should be displayed with appropriate context of its usage and violence.

It shouldn’t, like I just said. Is this a joke survey? A weapon used by a killer should never carry any relevance or applause. Think of it through the mind of a weak person having no reason to live. “ I have accomplished nothing I have no job, no kids, no family. Maybe I should assassinate a public figure. At least then I will live forever.” I believe we should use an alias to define people like JWB and LHO. Let the name never live on.

Suspended with wires at the correct position and distance from Lincoln's head for all to see how close Booth was standing behind the President.

Not until it’s been at least 50 years past the time, they shouldn’t be displayed. Right away seems distasteful.

When it is something this historic, it needs to be seen by the public.

In a separate room where you can see it if you want or can totally avoid it.

I think they should display it carefully with high security so that no one can steal it and use it again.

By definition, a murder weapon does not become a historic artifact until a period of time has passed after the significant event. Time passes, memories fade, the weapon should be displayed within the context of its place in history.

They should display the weapon so that the public can view this vital piece of history, a pivotal moment that will never be forgotten. To think that a weapon so small it could fit in a pocket, could affect people half way across the world is terrifying. It's important to educate yourself, and you can't do that if it's being censored.

They should ask permission from the family and then put it in a case and have a lot of information around it about Lincoln.

In a secure way, while also having some type of remembrance dedicated to the victim, for the sake of basic human decency. After all, the murder weapon ended a person's life.

Make a wax museum model of John Wilkes Booth and place the gun in his hand.

It should be displayed with careful acknowledgement that a man killed Lincoln, not the weapon itself. Lincoln died because a man used a weapon to murder the president.

This was an emotional scene. I lost my dad in the 1995 Murray [Murrah] Federal Building in Oklahoma City. Allowing the public to see what “acts of violence” including props can do…makes the spectator realize this is real. Emotions and all, I love that y’all have it displayed. Let the public see what history can mean, if in the hands of evil.

Learn more about the deringer

Should Ford’s Display a Murder Weapon?

Learn more about a 1931 letter denying a request to display the deringer at Ford’s theatre.

What Happened to the Deringer?

After the Lincoln assassination, Booth’s gun did not return to Ford’s Theatre for 85 years. Where did it go during that time?