John Wilkes Booth, a popular 26-year-old actor who was also a Confederate sympathizer and white supremacist, had been plotting for months to abduct Lincoln and give the Confederacy another chance. But three days earlier, hearing the president talk of his plans to bring the nation together—in particular, Lincoln’s plans to grant some African-American men the right to vote—Booth’s plans turned murderous.

On the morning of April 14, 1865 (Good Friday), actor John Wilkes Booth learned President Abraham Lincoln would attend a performance of the comedy Our American Cousin that night at Ford’s Theatre—a theatre Booth frequently performed at. He realized his moment had arrived.

By 10:15 that evening, the comedy was well into its last act. In the Presidential Box, President and Mrs. Lincoln and their guests, Major Henry Rathbone and his fiancée, Clara Harris, laughed at the show along with the audience—not knowing that Booth was just outside the door.

Conduct your own investigation below! As you look at the evidence, consider:

John Wilkes Booth likely hands his calling card to Charles Forbes, the president’s messenger who is seated outside the door, and enters the vestibule of the box. Booth hides there, just steps from the president, waiting.

Alone on stage, actor Harry Hawk delivers the funniest line of the play, and the audience erupts in laughter.

As the audience roars, Booth steps into the box. He fires a single bullet into the back of Lincoln’s head. The president immediately loses consciousness.

One of the Lincolns’ guests, Major Henry Rathbone, sees what has happened and tries to stop Booth. Having dropped his pistol, Booth slashes at Rathbone’s arm with a dagger.

Booth jumps over the box’s railing onto the stage, catching his spur on the Treasury Guard flag adorning the front. He lands awkwardly, likely breaking his leg.

Booth flashes his bloody dagger on stage. A surprised Harry Hawk flees into the wings. Booth yells, “Sic semper tyrannis!” [Thus always to tyrants!] and “The South is avenged!”

Booth hobbles to the back door of the theatre, where orchestra conductor William Withers attempts to stop him. Booth slashes at Withers, steps outside and jumps onto a waiting horse.

Drs. Charles Leale and Charles Sabin Taft get into the Presidential Box. After examining the president, Leale declares that Lincoln will die that night. Soldiers carry Lincoln out of the theatre.

James P. Ferguson owned the restaurant beside Ford's Theatre and was an audience member.

Julia Adeline Shepherd was an audience member seated in the Dress Circle.

Will T. Kent was an audience member seated in the Dress Circle.

Laura H. Freudenthal was seated in the front row of the Dress Circle.

G. B. Todd was seated in the Dress Circle outside of the Presidential Box.

Captain Theodore McGowan was an audience member seated in the Dress Circle.

Frederick A. Sawyer attended the theatre that night with Edwin Bates.

Daniel Veader was in the third row of the Orchestra.

John L. Bolton was a Lieutenant in the Provost Guard.

South Carolina merchant Edwin Bates was seated in the front row of the Orchestra.

James S. Knox was seated in the second row of the Orchestra level.

New Mexico’s delegate to the House of Representatives recalled in 1909 what he saw in Ford’s Theatre.

J.L. Debonay was a stagehand at Ford's Theatre.

William Withers was a Ford's Theatre orchestra leader on the evening of President Lincoln's assassination.

Jacob Ritterspaugh was a stagehand at Ford's Theatre who assisted with scene changes.

Jeannie Gourlay was an actress in the cast of "Our American Cousin" that night.

On the night of April 14, 1865, he unknowingly was tasked with holding John Wilkes Booth’s escape horse.

John Miles was in the flies backstage of Ford's Theatre during the play.

Major Rathbone and his fiancée, Clara Harris, accompanied the Lincolns to the theatre that evening.

Harry Hawk was the only actor on stage when Booth’s gun fired. 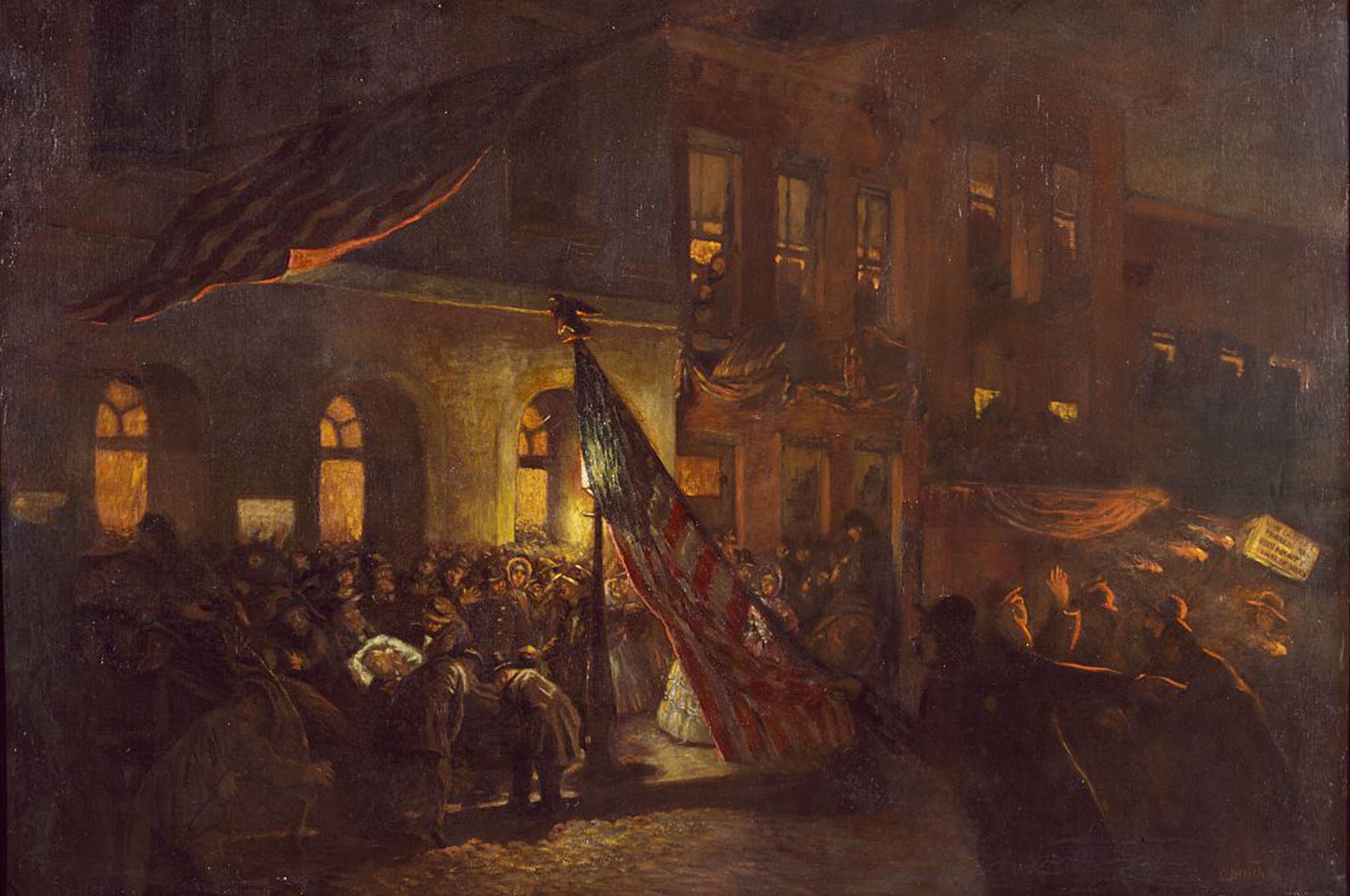 U.S. flags were hanging throughout Washington in celebration of the end of war. At Ford’s Theatre, the President’s Box was decorated with both an American flag and a U.S. Treasury Flag. After the assassination, this symbol reminded American citizens of the leader they had lost.

Soldiers carried the president out onto Tenth Street, hoping to return him home to die in peace with loved ones surrounding him, as was the Victorian ideal. The above image shows the theatre draped in mourning and protected by armed guards after the assassination.

Panicked and shocked citizens poured out of the theatre, unsure if the president’s assassination was a sign of an impending Confederate attack on Washington. That confusion spread across the country, as this proclamation shows.

A bumpy ride from the theatre to the White House could mean immediate death for the president. Doctors agreed they should take Lincoln to a nearby location instead. The above image shows the dirt road outside of Ford’s Theatre.

Like Carl Bersch, some eyewitnesses peered down from their balconies or windows at the chaos playing out on Tenth Street. This image shows the Petersen House and other nearby homes.

Henry Safford, who lived in the Petersen boardinghouse across the street, encouraged the group carrying Lincoln to bring the President into an empty room there.

A torchlight parade celebrating Lee’s surrender passed by the theatre as the Lincolns were inside. This parade prompted Carl Bersch to sketch what soon became a scene of tragedy on Tenth Street.

When U.S. Army soldiers captured and killed John Wilkes Booth, they emptied his pockets. What was Booth carrying during his 12 days on the run?

John Wilkes Booth killed Lincoln with this small, single-shot pistol. Why would Booth use a weapon with only one bullet?

The night of April 14, 1865, attendees of Ford’s Theatre expected to see a regular performance of “Our American Cousin.” Little did they know that what they would see that night would change the course of American history.

Dr. Samuel Mudd claimed not to recognize the two men who appeared at his home the morning of April 15, 1865. See the pieces of evidence that disproved his story and sent him to prison.

What did Lincoln wear to Ford’s Theatre the night John Wilkes Booth murdered him? See his clothes, including the special message sewn inside his overcoat.

When investigators arrested John Wilkes Booth’s co-conspirators Lewis Powell and George Atzerodt, what evidence did they find to connect them to the crime?

The presidency is known to age a person quickly. How did the stresses of the presidency and Civil War change Lincoln’s appearance?

S. S. Elder, a welder in Springfield, Illinois, knew he was going to be a part of history when he was asked to seal the coffin of President Abraham Lincoln. See the tools he preserved for posterity from that important job.

For seven weeks in summer 1865, the country’s attention was fixed on a small courtroom in Washington, where eight of John Wilkes Booth’s accused co-conspirators were on trial for their lives. See memorabilia from that trial, including fragments of rope believed to be from four conspirators’ nooses.

An activity for students—based on the content of this webpage—to complete on their own without requiring the assistance of a teacher or adult.