Photos from the Archives: A Case of Mistaken Identity? 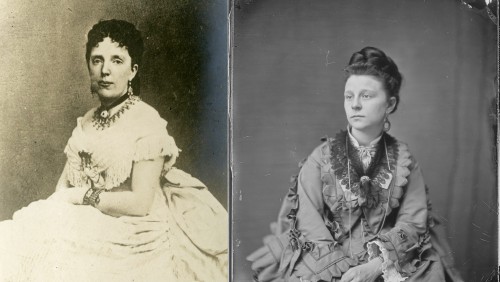 Harris, the daughter of U.S. Senator Ira Harris of New York, is most known for attending the April 14, 1865, performance of Our American Cousin with her fiancé, Major Henry Rathbone, President Abraham Lincoln and First Lady Mary Todd Lincoln. When preparing for our recently-released book about the history of Ford’s Theatre, we found a few different images of Harris. We ultimately chose the one you see here. Not only is it the most common image of Clara Harris in a Google search but, more importantly, it’s labeled in the National Archives online catalog as being of Harris. If it’s labeled that way in that catalog, it must be correct, right?

As it turns out, not so much. Not long after Ford’s released the book, we received (on the same day, at that!) nice emails from Roger Norton, a history teacher who runs a well-regarded website and discussion forum on the life of Abraham Lincoln, and Dave Taylor, a teacher who writes the also well-regarded BoothieBarn blog.

Both informed us that the photo we used of Harris was not the right Clara Harris. I’ll let Dave Taylor explain further:

“This photo is a part of the Mathew Brady collection at the National Archives. The oldest label on the image is written in pen and states that it is of ‘Mrs. Harris.’ At some point around the 1960s, an unknown archivist or researcher added a pencil notation to this image stating that it was of Clara Harris, who was present at Lincoln’s assassination. In the decades that followed, this misidentified photograph appeared in history books, and a framed version of it was on display at Ford’s Theatre for many years.

“It wasn’t until the 1990s that an antique collector who owned a few legitimate images of Clara Harris noticed the discrepancy in appearance between this woman and the real Clara. He also pointed out details such as the original photograph being labeled as ‘Mrs. Harris’ instead of the correct Miss Harris or Mrs. Rathbone. The incident made the newspapers with one commenting, ‘experts interviewed for this article said they could think of no other instance when a photo so long and widely presented as genuine turned out to be spurious.’ In 2000, the Ford’s Theatre National Park Service site historian, Michael Maione, removed the framed photograph, and the National Archives agreed that the identification was incorrect.”

We’re sharing this story as a cautionary tale about any sort of archival research.

Indeed, it looks like we were wrong in publishing the initial photo. Although several history professionals reviewed the book before it went to press, apparently the word hadn’t spread. This post is, in large measure, to help spread that word.

The archivist also told us that it’s the National Archives’ policy to keep the original labels on whatever artifacts and images are in their collections. Many other libraries, archives and museums follow the same policy—after all, the original label is part of the artifact’s story.

As Dave notes, the label on this photo has both pen and pencil, indicating that the misidentification of this Clara Harris as Major Rathbone’s wife came at a later date. A researcher who sees that label in person would immediately know it to be suspicious.

But what about when that label is transcribed into an online catalog, where that nuance isn’t immediately visible and the accompanying documentation isn’t always available (as it isn’t in this case)?

This instance offers a valuable lesson in questioning any primary source and its metadata, rather than taking it at face value, and shows the always-changing state of historical knowledge. Good historical practice, not just for written documents but also for images, involves comparing what we know and what we don’t know. There are numerous examples of items believed to be authentic that weren’t, such as Lincoln’s supposed last letter (another instance where cross-referencing was important). Then there’s problematic metadata (or information about the object), which can prove just as tricky.

So, what can be done so that other researchers don’t make the same mistake we did?

The National Archives archivist agreed that the online catalog should contain a note in the image’s metadata. Thankfully, the National Archives’ database has recently gained the capability to add notes to individual collections items. So, the archivist told us that there will soon, indeed, be a note (once they get some of the technical kinks worked out).

In the meanwhile, I took matters into my own hands. The National Archives allows users to add their own tags. So, I added tags that say “false identification” and “questionable identification” to the metadata about the Harris image. Hopefully future researchers will see the tags we contributed, plus the note (when it appears), and pause.

Also, with Dave’s help, Ford’s switched out the misidentified Harris image for a verified one for the second printing of our book Images of America: Ford’s Theatre, as well as all future printings.

We hope that our mistake will be a cautionary tale for others. Always question your sources. Don’t take them at face value. This is a reminder we need from time to time—and clearly, a lesson that we needed to (re)-learn.

Dave Taylor is an elementary school teacher in Southern Maryland. For many years he has been fascinated by the tragedy that occurred at Ford’s Theatre on April 14, 1865. Dave researches and writes about the assassination of Abraham Lincoln on his blog, BoothieBarn.com.