A Stitch in Time: Historic Quilt Features Who’s Who of Civil War

Constructed by the U.S. Sanitary Commission volunteers during the Civil War, the remarkable quilt below was auctioned at the Philadelphia Sanitary Fair in 1864 to raise funds that were used to improve sanitary conditions for soldiers throughout the Union Army. Over the course of the war, at Sanitary Fairs throughout the North, thousands of U.S. Sanitary Commission volunteers—primarily women eager to do their part to support the war—cut the disease rate of the Union Army in half and raised nearly $25 million in money and supplies. 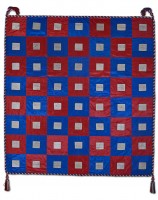 While the quilt might have raised a few hundred to a few thousand dollars in 1864, today it is a priceless artifact in the National Park Service collection. Find out more about the quilt itself here.

The most remarkable aspect of the quilt is the 56 signatures from celebrated U.S. politicians, military leaders and other public figures—you will find President Lincoln, General Grant, and Henry Wadsworth Longfellow, among many others, and several Pennsylvanian luminaries that would have appealed to the audience at the Philadelphia Fair—as well as figures that are less well-known today.

Below, we explore the stories of five figures you might not have heard of, more than 150 years after they put their pens to the quilt-maker’s fabric.

John Sedgwick has the dubious distinction of being the highest-ranking Union casualty of the war. He

was killed by a sharpshooter at the battle of Spotsylvania, and legend has it that his last words, ironically, were “They couldn’t hit an elephant at this distance.”

Sedgwick was born in Connecticut in 1813 and graduated from West Point Military Academy in 1837 among a class of famous officers that included Joseph Hooker and Jubal Early. He went on to aid in the government’s attempts to remove the Seminole people from Florida and Cherokee people from Georgia and later served in the U.S.-Mexican War under both Zachary Taylor (later U.S. President) and Winfield Scott (commanding general of the U.S. Army at the beginning of the Civil War).

He served at Antietam and Chancellorsville and commanded his own troop through Gettysburg and Rappahannock Station. He was directing artillery placement at Spotsylvania Courthouse when he uttered his famous last words.

Edward Everett was a celebrated orator during the Civil War but today is, unfortunately, best known forgiving the two-hour speech that preceded Lincoln’s two-minute address at the dedication of the Gettysburg National Cemetery.

Everett was one of the most well-known and well-regarded speakers of his time, composing and memorizing his many lengthy speeches—the Gettysburg speech was 13,000 words and 50 pages long—and refining them, sometimes over decades. He was also a successful politician, serving as governor of Massachusetts, U.S. ambassador to Great Britain, secretary of state for Millard Fillmore, and finally U.S. senator.

His two-hour-long speech at Gettysburg was the norm during the time. His speech was closer to what the crowd was expecting at the Gettysburg dedication, much more than the President’s brief address. Still, the following day, Everett wrote to Lincoln, “I should be glad if I could flatter myself that I came as near to the central idea of the occasion in two hours, as you did in two minutes.”

John Greenleaf Whittier was one of the Fireside Poets, a group of American Victorian poets who were

the first to achieve heights of popularity that rivaled British poets of the day. Along with Whittier, the group includes Henry Wadsworth Longfellow, Oliver Wendell Holmes, James Russell Lowell, and William Cullen Bryant—all of whom are also featured on the quilt.

Whittier was a Quaker from Massachusetts, who, like many of the Fireside Poets, was also active politically. He strongly opposed slavery, and many of his poems and essays before the Civil War advocate swift and absolute abolition. He also founded the antislavery Liberty party in 1840 and ran for Congress in 1842. He went on to support the Republican Party in the 1850s.

Millard Fillmore was elected vice president to Zachary Taylor in 1849 and, when Taylor died in 1850,

served as president from 1850-1853. He oversaw the Compromise of 1850, which was a package of five bills passed by Congress in 1850 that admitted California as a free state, gave New Mexico territorial status, forgave $10 million in debt for the Republic of Texas and cemented its borders, passed a harsher version of the Fugitive Slave Act, and ended the slave trade in Washington, D.C. The compromise was meant to ease tension over slavery but instead proved to be only a temporary solution to the sectarian conflicts that would later result in the secession of the Southern states.

During the Civil War, Fillmore was vocal in his criticism of Lincoln and his war policies, including the Emancipation Proclamation. He led the Union Continentals, a regiment of soldiers from upstate New York, during and after the war. The Union Continentals served as guards for Lincoln’s funeral train as it passed through Buffalo, New York, in 1865.

John Ross was principal chief of the Cherokee nation from 1827 until his death in 1866. During his long

tenure, he led his people on the Trail of Tears, during which U.S. government forced the Cherokee to leave their homeland in Georgia and relocate to “Indian Country” in present-day Oklahoma.

A great statesman and a powerful advocate for his people’s rights, Ross negotiated several treaties with the U.S. government and finally, when it was clear there was no other option, worked with officials to coordinate the move to Oklahoma. Once in Indian Territory, Ross created a new community, organizing schools, colleges and farms.

Heather Hoagland is the Exhibitions and Collections Manager for Ford’s Theatre Society, where she oversees the exhibitions program in the Center for Education and Leadership and cares for the Ford’s Theatre Society collection. She holds an M.A. in Museum Studies from The George Washington University. Follow her on Twitter @HLHoagland.